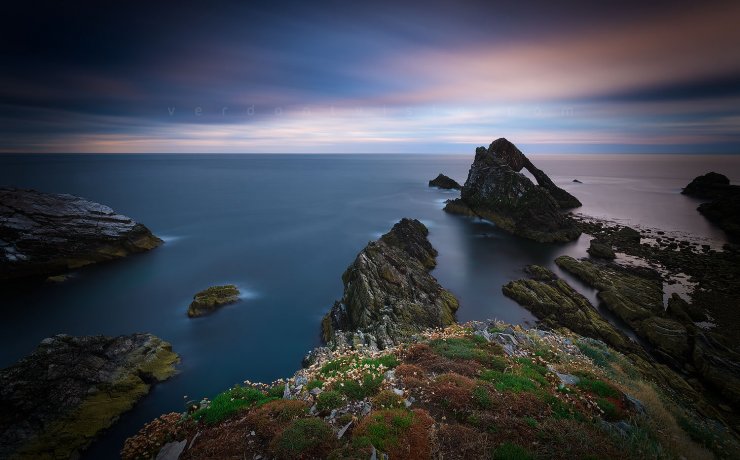 Welcome to the latest instalment of the Peco & Peel Photography Ordeal.

and I have a simple system for location choices - we get shots each at choosing the location we'll be shooting. It's simple and fair - we had to implement this system because Skye was becoming a recurring theme. Not that there is anything wrong with Skye you understand, but consecutive visits where various falls on arses and a lack of luck with optimum photography weather gets you down. So the "shots each" system at least works for ensuring some variety of locations in which to experience useless photography but great camping weather - as well as the obligatory slips and slides. 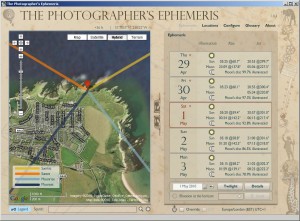 It was Peco's pick this time so I was expecting to be heading back to Skye again. Instead the Moray coast was the destination of choice. As luck would have it, the timing for the trip was serendipitous as there is a sunrise event that happens for about a week, twice a year. That is, the sun rises through the sea arch, the Bow Fiddle Rock, at Portknockie in Moray. This happens in May and August. I noticed this a while ago when I was messing with The Photographers Ephemeris

and had the place in mind for some future visit.

So with fingers crossed for good weather we headed off.

We stayed at the Sandend Caravan Park

which was a perfect location to minimise the early morning drives to Portknockie. However it was a really busy place - loads of noisy kids running about till late and inconsiderate eejits banging music till even later. The site itself was nice & clean even if we where all a bit cramped in together.

I have to say, the grub up that way is simply awesome. We sampled the bakery and chipper hoose in Portsoy, Coo burgers & Ice cream in Lossiemouth as well as the now traditional bacon rolls in the morning. Yum!

As for the photography locations, we where concentrating on the BFR more than anything else and ended up there on 3 occasions. Once for a fairly unremarkable sunset and two equally not lighting the pants on fire sunrises. We also did an evening on Sandend Beach where we had a monstrous sky but little in the way of sunset. And finally we took a visit to Rattray Lighthouse near Peterhead on the way home.

Dragging your sorry ass out of bed at 4:30am

Summer sunrises are a bugger. The choice appears to be a later lie-in but at the cost of cold camping (winter) or wake-ups at truly shitty hours but a fairly warm sleep. Both are fairly uncomfortable coz, well come on, camping is shite!

Note to self, out of season static caravans! Cheap and a much higher standard of comfort! Plus you can go at more unsettled times of the year for that added touch of drama and action!

Isn't this a photography blog?

Well, yes I suppose I should get on with it.

As a regular reader you'll know I'm mad for Image Averaging but I've been having some issues with ghosting under certain conditions. I've gone through several trips where I've done silly numbers of exposures as a fix to the problem. This trip I paid special attention to the delays between frames. On a memorable image it's made up of 75 (!) frames with no delay - i.e. the camera shooting as fast as it can. On others I dispensed with the timing functions of the intervalometer and instead varied the delay by triggering the shutter manually.

I didn't have so many problems with ghosting on this trip. There is one image ( Rattray Lighthouse #1 >> ) where there is some ghosting apparent but I kind of like the way it looked so I've left it in.

I'm putting the success down to the variable delay but to be honest I'm not too keen on this method. I love the photography, I love the standing around talking nonsense about will it/won't it happen (the sunset/sunrise), the techie nonsense about what shutter speeds, apertures, filters each of us is using and generally revelling in the greatness of the outdoors. I often go into hypnotic trances - often caused by the "beep beep beep beep beep beep beep beep beep beep" of Peco's to be eternally damned remote - and I forget to trigger the shutter for waaaaaay too long! I've got some delays of over 30s on 10s exposures! From previous testing, this is a Bad Thing™.

However it all worked out in the end.

Show Me The Processing

As for the processing, there was a minimal amount done really. There is a couple of shots where I use a personal favourite short-cut - the black overlay/soft light trick - while for the rest, they where pretty much only processed in ACR.

Peco does his white balance different from me. Historically I've stuck to the pre-sets in the White Balance drop-down in ACR but this time I did most of them Peco's way - manually - a la Peco. Basically you just slide the Temperature and Tint sliders to taste.

I've done this to the vast majority of them, the exceptions being the following where I used the camera defaults. My Nikon often gives off a strong blue tint in low light. It's a favourite of mine and I keep coming back to it : - 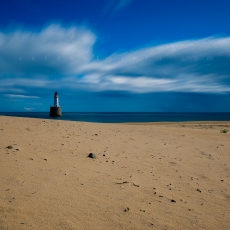 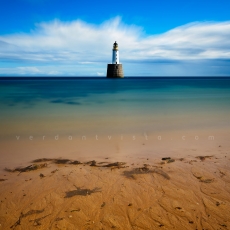 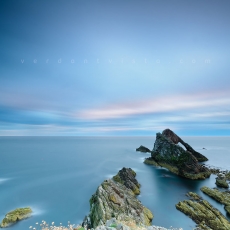 Just a point of interest really. Not to say one method is better/worse or right/wrong - just down to taste really. But it's good to try different methods as you can sometimes surprise yourself.

It's All Bright When Shooting To The Right

On a different note, one interesting aspect is that I've left the brightness captured by the camera in for the processing of Bow Fiddle Rock Sunset #1.2 >> . Some time ago I got into the habit of shooting to the right.

Practically speaking this means using the histogram to judge your exposure rather than the image on the LCD. This tends to result in rather bright NEFs on the LCD so there's not too much point in chimping :(

When I get back to base I almost always pull the exposure back in ACR by around 2 stops. To understand why you bother with this, I highly recommend reading The Luminous Landscape's take on shooting to the right

However in this one I decided to leave it as it was. I like the colour and although it wasn't nearly that bright to the eye at the time, I don't really have a problem with the fact it's not representative of what we saw with our eyes. The way I think about it, it's our eyes that don't have the ability to see the scene like this. The camera is perfectly capable of making a bright scene dark and visa-versa. I don't add movement, colour or light to a scene. I may exaggerate what's collected by the camera but in the case of this shot I've kept it as the camera saw it. I thought it made a nice change to the dark and moody like we have in Sandend Sunset #1 >> & Sandend Sunset #2.1 >> 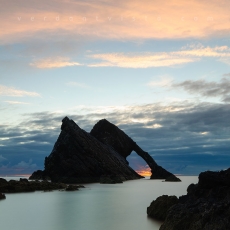 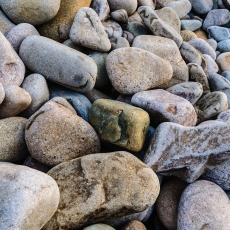 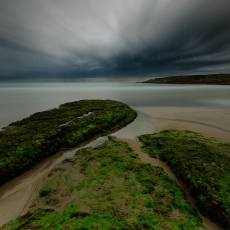 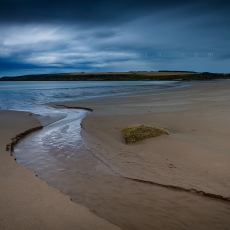 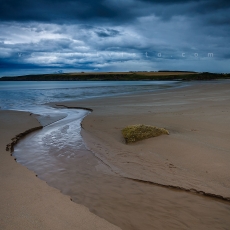 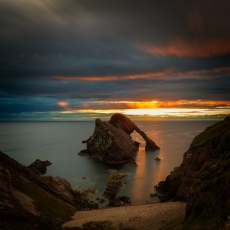